BOSTON, MA, 5/6/2019---On Saturday, May 11 from 1:00-3:00pm, Massachusetts residents living with ME/CFS, also known as Myalgic Encephalomyelitis (ME) or Chronic Fatigue Syndrome (CFS), will rally at the Boston Common Liberty Mall together with caretakers and allies to call for immediate and comprehensive action on the ME/CFS public health crisis. They will join thousands of others demonstrating physically in more than 80 cities worldwide and virtually on social media as part of the fifth global #MillionsMissing protest.

For the first time, the Boston #MillionsMissing demonstration will feature speakers and performances in an hour-long program beginning at 1:30pm. The program will open with testimonials from patients and family members and a group sing-along of a patient-arranged version of “Blowin’ in the Wind” with alternative lyrics about ME/CFS. Speeches on recent accomplishments and upcoming challenges in ME/CFS activism and advocacy will be followed by a Lie-In representing severe patients’ daily bedridden existence and a Parents’ March in honor of Mother’s Day by those whose children’s lives have been stolen by ME/CFS.

The event will also feature compelling visual displays and a solo performance art protest. During the rally, dozens of pairs of shoes will be displayed to represent the activities ME/CFS patients are missing from every day, accompanied by patient photos and stories as well as informative posters. Following the end of the rally at 3:00pm, a local ME/CFS patient and activist will use an air mattress in a solo performance reflecting on the physical toll on patients’ bodies and health taken by the effort of advocating for the research, treatments, and services the illness deserves.

The Boston #MillionsMissing 2019 demonstration is co-sponsored by #MEAction and the Massachusetts ME/CFS & FM Association, and will coincide this year with Mother’s Day weekend. This presents an opportunity to highlight the particular anguish ME/CFS causes to parents, whether from being unable due to their own illness to be present for their children in the ways they would like, or from witnessing their sick children’s suffering and lost potential.

Natick resident Cecilia Carrera, mother to recently-diagnosed patient Claudia Carrera, said, "It's been devastating to watch my daughter have her life taken from her. She is not only incredibly talented but a very giving person, dedicated to effecting change in the world. After struggling with undiagnosed symptoms for years, she has had to leave her life and work in NYC and move back home to be cared for. Now, at a time when her sisters and friends are starting families and achieving career milestones, she is stuck in bed with no treatment and no future.”

When Jennifer Brea became sick with ME, she was forced to drop out of her Ph.D. program at Harvard University. She co-founded #MEAction from her sickbed and chronicled her journey with ME/CFS in the documentary UNREST, which won Sundance and Boston Globe (GlobeDocs) Film Festival awards and was short-listed for an Oscar nomination. Brea said, “This is about more than a disease. This is a social justice issue. We are fighting for the research funding and medical education we need to stop this epidemic. We are fighting for our lives.”

Recently, Massachusetts Senator Ed Markey, a champion for ME/CFS patients, introduced a Senate Resolution for ME/CFS, co-sponsored by Senator Susan Collins of Maine and others. In 2017, the MA Congressional Delegation issued a joint statement in support of ME/CFS patients. “With the support of our elected representatives, we look forward to holding federal health agencies to their promises for more funding, more research, and more hope,” said Leah Williams, president of the Massachusetts ME/CFS and FM Association.

ME/CFS is a systemic neuroimmune disease largely forgotten by the medical, scientific, and public health communities. It causes dysfunction of the nervous, immune, endocrine, and energy metabolism systems, and is characterized by post-exertional malaise (a severe worsening of symptoms after even minimal exertion), leaving around 70% of patients unable to work. According to new estimates, ME/CFS afflicts up to 70,000 adults and children in MA and 3.4 million (or 1 in 100) in the US, many homebound and bedridden for decades. 75% are women and prevalence appears higher in marginalized communities, contributing to the decades-long neglect of this devastating disease.

The #MillionsMissing movement was first launched by #MEAction in 2016 to bring visibility to the millions of people with ME/CFS who are missing from their lives, including those who cannot attend an in-person protest. It demands that our federal health agencies - the NIH, CDC, and HHS - provide equitable funding, new treatments, and clinical care for people with ME.

Please join us on May 11 as we recognize and fight for the #MillionsMissing due to ME/CFS in the United States and around the world. 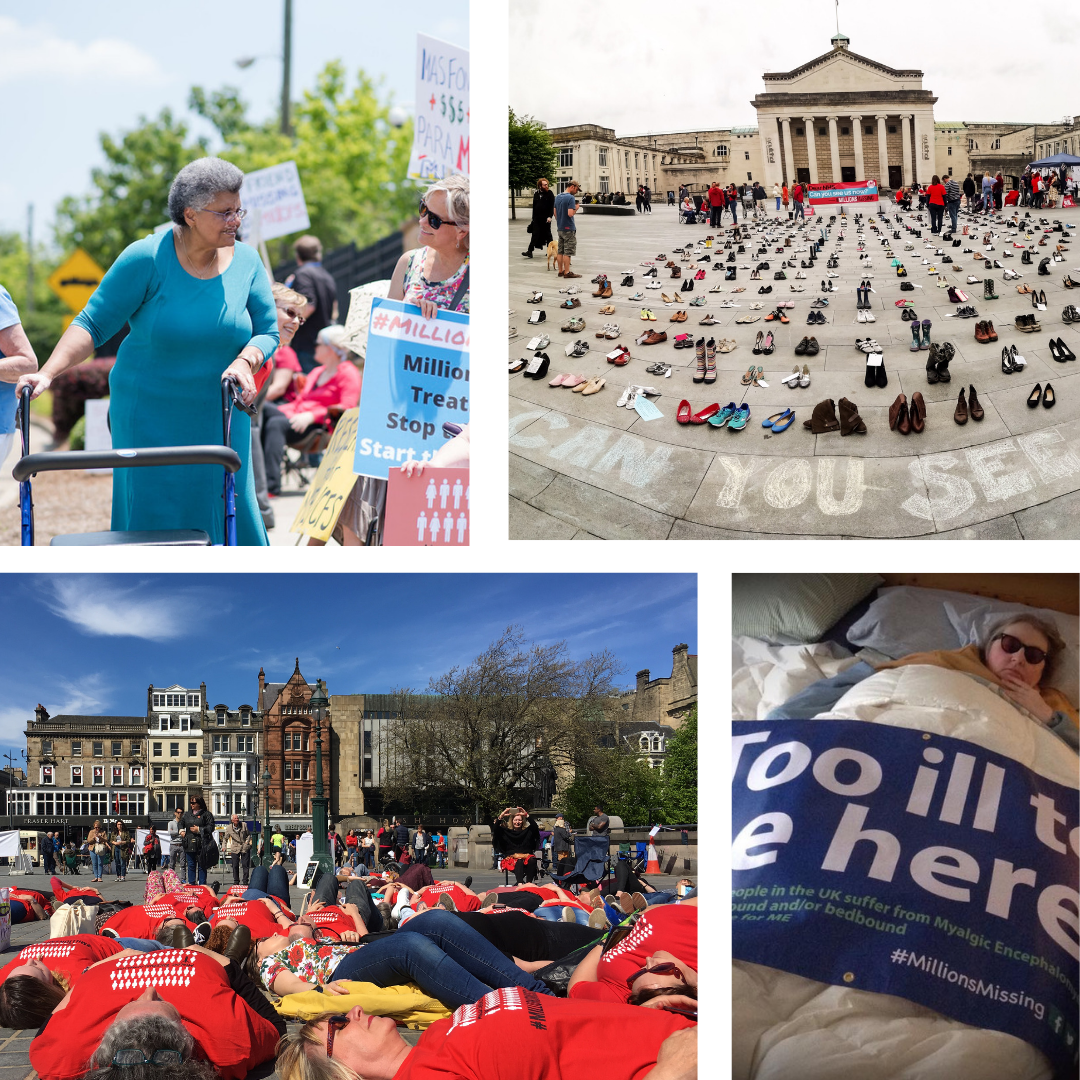 The Massachusetts ME/CFS & FM Association, a 501(c)(3) founded in 1985, exists to meet the needs of patients with ME (Myalgic Encephalomyelitis), CFS (Chronic Fatigue Syndrome), and FM (Fibromyalgia) in Massachusetts and neighboring states. It works to educate health-care providers and the general public, provide supportive services for patients and their families, and advocate for more effective treatment and research. The organization has held a dozen public education events, screenings of Unrest, and panel discussions in the last 18 months in partnership with the MA Dept. of Public Health, the MA State House, Mass General Hospital, the MGH-affiliated Cooley Dickinson Hospital, the Geisel School of Medicine at Dartmouth University, the MGH Institute of Health Professions, Wellesley College, Brandeis University, Boston University, and others. To learn more, visit www.massmecfs.org.

#MEAction is an international network of patients, caregivers, and allies empowering each other to fight for health equality for myalgic encephalomyelitis. To learn more, visit http://meaction.net and http://millionsmissing.org.