Meet the Author, Erica Verrillo, an Inspiring and Engaging Event 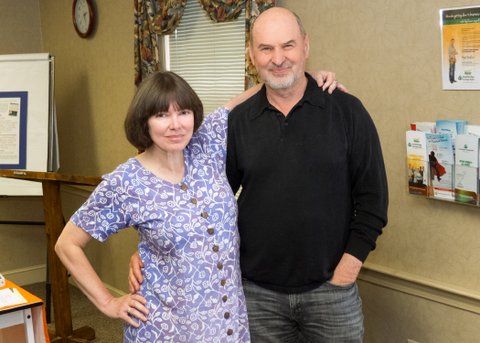 The Massachusetts CFIDS/ME & FM Association enthusiastically welcomed Erica Verrillo, author of Chronic Fatigue Syndrome: A Treatment Guide, 2nd Edition (Amazon Digital Services, Inc, 2012) on Saturday, May 18, 2013, in Sturbridge, MA. Guests came from far corners of the state, as well as some nearby states, to meet and hear Ms. Verrillo whose book is praised by patients and many specialists as the "go-to-reference" for CFS. The author noted she used the name Chronic Fatigue Syndrome (CFS) in this second edition because CFS is currently the most widely utilized term by clinicians and researchers in the United States. She also clarified the information in the book reflects many years of extensive research and not personal preferences or opinions.

Jane Shiyah, a parent of an adult child affected by CFS, provided a most gracious introduction for Erica Verrillo, describing her as "complex, complicated and multifaceted" as the illness itself. She shared some of Ms. Verrillo's fascinating and wide-ranging accomplishments such as being a classical musician, traveling and learning first-hand about the culture and political issues in Latin America as a hitchhiker, becoming a Mayan linguist, founding an aid organization for Guatemalan refugees, and having a long history as a political activist. Verrillo has also written many short stories and a series of middle-reader fantasies—a trilogy about Elissa, a teen who lives in a magical place and can speak to the animals. These stories were invented by Ms. Verrillo for her daughter who also has CFS.

Erica Verrillo explained how this book came about (referring to the first edition published in 1998 by St. Martin's Press). Although she had fallen ill in 1987, that problem was never diagnosed. In 1992, while working towards her doctorate in Speech Communication at the University of Texas in Austin, Ms. Verrillo became sick again upon her return from field work in Guatemala. This time she was extremely ill, was forced to abandon her studies, had to be hospitalized, and was confined to her bed for two years. Her daughter also become very ill during the same time. They both were diagnosed with CFS. (Ms. Verrillo was diagnosed by Dr. Paul Cheney.)

Like most patients, Ms. Verrillo was shocked to discover how little doctors knew about CFS—having seen her two year struggle be described as "spells" in her medical records. She was also surprised to find nothing published on treatments for CFS. Having studied and worked in a variety of fields, Verillo proceeded to do her own research. She became acquainted with Lauren Gellman, a vice-president of a Fortune 500 company prior to developing CFS, who was very ill but shared a mutual concern about this lack of information. Due to the severity of their illness and their personal limits, they communicated with each other through an exchange of cassette tapes that they mailed back and forth. After two years of hard work and true grit, their book was completed and ready for publication. The authors actually thought about what they would do if a cure was found in the interim; they would burn the manuscript! However, their 127,000 word text did not go to waste and served as the most comprehensive treatment guide available to patients and healthcare professionals for many years.

Erica Verrillo read part of the Introduction which describes the premise of the book, "The absence of a cure does not in any way imply there is no treatment for CFIDS." Throughout the ages, many different methods and remedies have been used to care for people—these may provide symptom relief, repair damage, and/or help to restore strength. The purpose of treatment was conveyed in this analogy, "If CFIDS is like falling into a hole, as some patients have observed, recovery is like climbing out of the hole, step by step, rung by rung." Knowledge about effective treatments can provide patients with the rungs leading to recovery. Recovery can vary greatly between patients, can being substantial or partial, but Verrillo thinks recovery is possible at any point based on cases reviewed. [Note: CFIDS is the term used in the first edition.]

The author and the patient community share many frustrations, particularly how the medical community cannot seem to see the forest for the trees. Post-exertional malaise (PEM) is now recognized as the most distinct feature of CFS that is usually not found in other illnesses. PEM is when effort expended on physical or mental activity causes an exacerbation of all symptoms in a person with CFS. The sicker the person is, the less effort it will take to produce PEM. Doctors very rarely, if ever, ask patients whether they have this significant symptom. Doctors tend not to look at the body as an "entire system." Ms. Verrillo stated that the truth is that every illness is a multi-system disorder because the immune, endocrine and nervous system often share the same receptors. She provided many other examples of things that go unnoticed in CFS.

With that said, new research on the causes and mechanisms in CFS and treatment protocols have emerged over the last 15 years warranting a complete update of the first edition of the treatment guide. Ms. Verrillo had to review all previously and newly published research and to decide which material to keep or omit—this was an arduous task, but someone had to do it. The second edition has more than twice the data of the first one, totaling 277,000 words or 817 pages. This shows the depth and scope of Verrillo's research and work.

Erica Verrillo explained that by self-publishing the second edition, it allowed her to give copies of the book away. So far, more than 15,000 copies have been downloaded for free. Ms. Verrillo described this book as a labor of love, created solely to educate patients and the medical community. The information can be downloaded directly to the reader's computer without the need to own a Kindle or Nook, from Amazon for only $2.99. The E-format allowed Verrillo to incorporate links to numerous resources; so everything a patient or a doctor needs is just a click away. This book functions as an encyclopedia on CFS including natural and homeopathic treatments.

We would like to extend our sincere gratitude to Erica Verrillo for sharing her time, wisdom, and valuable contribution with our guests. To learn more about Ms. Verrillo, visit her website.