Page 1 of 4
The Massachusetts CFIDS/ME and FM Association warmly welcomed Rik Carlson, president of the Vermont CFIDS Association, and Michael Thurston, videographer, for the Massachusetts premiere of INVISIBLE. This event, as part of the Association's 2010 series of educational forums, was held at Morse Institute Library in Natick, on October 30, 2010. The film was received with strong support and interest as well as great appreciation for the efforts by its filmmakers.
Michael Thurston and Rik Carlson 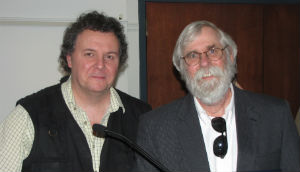