Massachusetts Dept. of Public Health invites you to a screening of UNREST 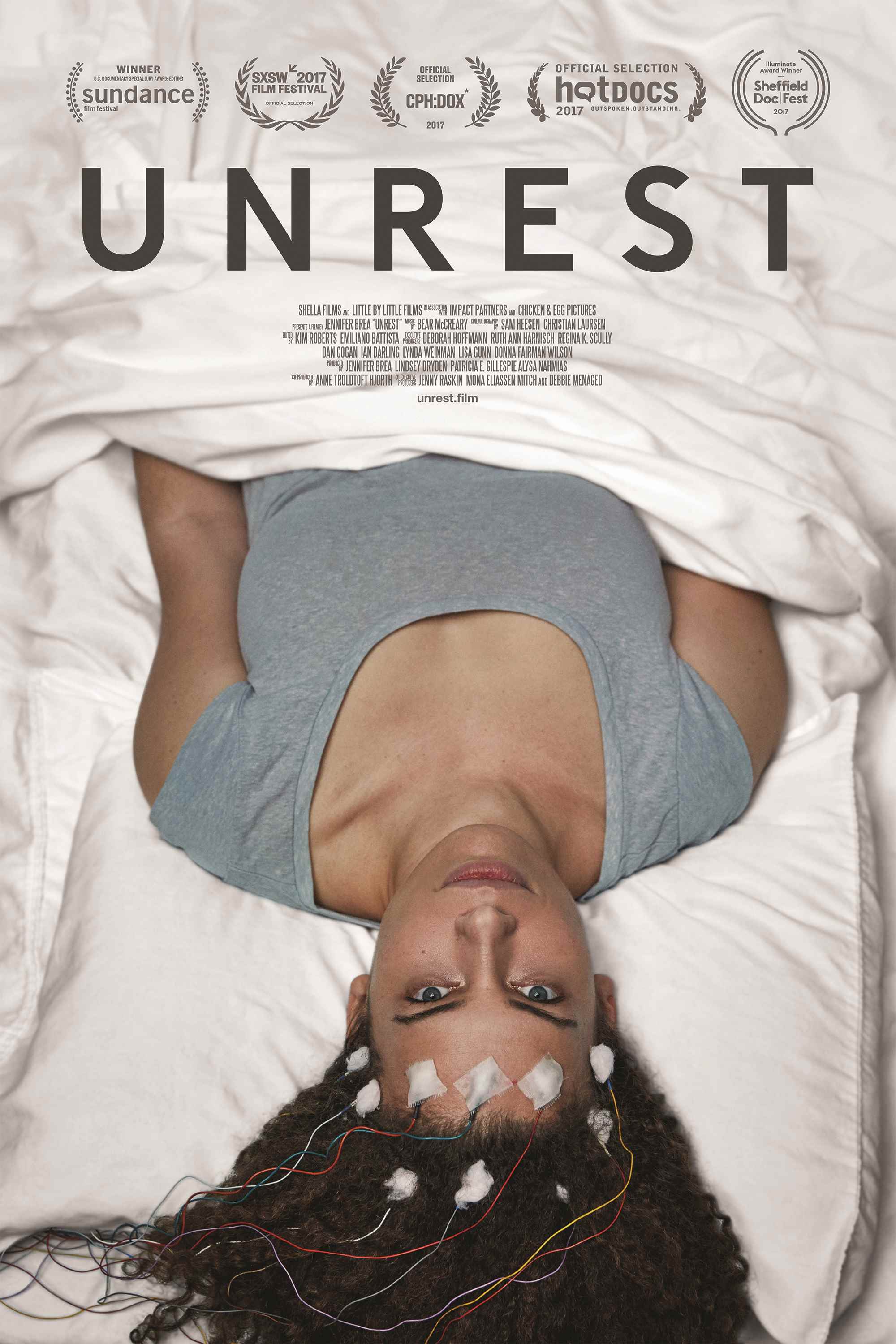 The Massachusetts Department of Public Health and the Massachusetts CFIDS/ME & FM Association are pleased to host a special showing of the Oscar contender and Sundance award-winning documentary, UNREST, by Jennifer Brea on Tuesday, March 27, 2018 at the State Laboratory, 305 South St, Jamaica Plain, MA 02130.

This program is for all public health and healthcare professionals, scientists and researchers.

The film will be followed by a panel discussion hosted by NPR/WBUR's Senior Correspondent and Host Deborah Becker.

Jennifer Brea, the filmaker, will attend the event in person, participate in the post-film panel, and be available to answer questions.

The program will begin at 5:45 p.m.and will end around 8:15 p.m. Doors open at 5 p.m. and a light supper will be provided. The theater is wheelchair accessible. Parking is free.

Synopsis: When Harvard Ph.D. student Jennifer Brea is struck down by a fever that leaves her bedridden, she sets out on a virtual journey to document her story as she fights a disease that medicine forgot (1 hour and 37 minutes).

Pre-registration is strongly encouraged to ensure your seat and to facilitate access to the building.

Please help us publicize this event. Download and print the flyer.

Alfred DeMaria, Jr., M.D., is the Medical Director and State Epidemiologist at the Bureau of Infectious Disease and Laboratory Sciences, which is part of the Massachusetts Department of Public Health. He is based at the Hinton State Laboratory Institute. MassMed said, “Dr. DeMaria has become the face of public health in Massachusetts, and it is his lifelong devotion to the cause of social justice through public health that has defined him."

Jennifer Brea is an independent documentary filmmaker based in Los Angeles. She has an AB from Princeton University and was a PhD student at Harvard until sudden illness left her bedridden. In the aftermath, she rediscovered her first love, film. Her feature documentary, Unrest, premiered at the Sundance Film Festival in January, where it won a Special Jury Prize. Additionally, her film was short-listed for an Oscar. She is co-creator of Unrest VR, winner of the Sheffield Doc/Fest Alternate Realities Award. An activist for invisible disabilities and chronic illness, she co-founded a global advocacy network, #MEAction, and is a TED Talker.

Ronald W. Davis, Ph.D., is Professor of Biochemistry and Genetics at Stanford University, Director of the Stanford Genome Technology Center, Director of the Chronic Fatigue Syndrome Research Center at Stanford University, and a member of the National Academy of Sciences. He is a world leader in genetics research and biotechnology development, especially recombinant DNA and genomic methodologies and their application to biological systems, for which he was awarded the 2011 Gruber Prize in Genetics.

Lisa Hall, RN, is a healthcare professional who has worked with ME patients for 17 years. During that time, she has been the head nurse at Northampton Integrative Medicine, one of Massachusetts's largest clinics serving patients with chronic illness, such as ME. Lisa facilitates and coordinates care for patients. She can speak from the perspective of a health care provider.

Dr. Faith Newton is Professor of Education at Delaware State University, and currently serves as the Chairperson of the Chronic Fatigue Advisory Committee (CFSAC) for the US Department of Health and Human Services, having been a member of that committee since 2015. As a career educator who has been a middle-school principal and assistant superintendent for curriculum and instruction, as well as the parent of a child suffering from ME/CFS, Dr. Newton has focused her research on successfully educating students with ME/CFS in the public school system. Her ME/CFS Fact Sheets are used by the CDC and in schools across the nation. She is the contributing author of the chapter "The School System" in the monograph "ME/CFS Diagnosis and Management in Young People: A Primer.”

ME/CFS (Myalgic Encephalomyelitis/Chronic Fatigue Syndrome) is a chronic, debilitating multi-system disease that leaves 28,000 in Massachusetts, 1 to 2.5 million in the U.S. and 17-20 million worldwide, disabled -- often bedridden and homebound for decades. It is a physical disease of unknown etiology. There are no treatments and no cure. It is estimated that up to 90% of patients are undiagnosed or misdiagnosed.

For Medical and Healthcare ProvidersWith the lack of medical education or clear treatment guidelines, most doctors find ME/CFS difficult to diagnose. Patients spend on average five years seeking a diagnosis. The film UNREST brings medical providers inside spaces they are rarely able to go – their patients’ homes and bedrooms – for an intimate look at a disease that leaves 25% of patients housebound or bedbound and often unable to even seek medical care. There are an estimated 1 to 2.5 million Americans disabled by ME/CFS.The film UNREST features interviews with doctors and scientists who have dedicated their careers fighting for patients with a disease once callously disregarded as hysteria. ME/CFS is on average more disabling and twice as prevalent as multiple sclerosis, but has no specialty home (patients are left to be managed by their primary care providers) and no approved drugs. But there is hope – research groups across the US (Stanford, UCSD, Cornell, Harvard, Columbia) and in the UK, Norway, Germany, Japan and Australia are beginning to uncover basic mechanisms of the disease. In 2015, the Institute of Medicine proposed new diagnostic criteria and in 2017, the CDC updated their guidelines, although these guidelines have not been widely disseminated or used in medical education.Ultimately, the film UNREST is a study on love and compassion. It invites medical providers to reflect how they can best support patients and caregivers grappling with any lifelong illness for which there are no clear answers and to reconnect with the reasons they first choose their healing profession.For ResearchersRates of chronic, immune-related diseases have tripled to quintupled in the last fifty years and yet our systems of research and care have been woefully inadequate to tackling the epidemic. UNREST is in many ways a story about what happens when we fail to invest in science. What role do our own biases play in the questions we choose to ask, the stories we tell, and the places we neglect to look? UNREST features Ron Davis, a Stanford professor of genetics & biochemistry whose work was crucial to the success of the Human Genome Project, who is now caretaker to his son Whitney who is so ill he can no longer speak. Scientists will come away from UNREST with a new understanding of how their work can directly impact people’s lives and will be inspired by the detective story of a disease that appears to be infectious, environmental and genetic; sporadic and epidemic; implicates the immune, nervous, cardiovascular, gastrointestinal and endocrine systems; and may go to the very beating heart of what makes complex animal life possible – our mitochondria. With so much low-hanging fruit, we hope UNREST will inspire new researchers to investigate a fascinating and challenging disease.

About the film UNREST

Twenty-eight year-old Jennifer Brea is working on her Ph.D. at Harvard and is months away from marrying the love of her life when she gets a mysterious fever that leaves her bedridden and looking for answers. Disbelieved by doctors yet determined to live, she turns her camera on herself and discovers a hidden world of millions confined to their homes and bedrooms by ME, Myalgic Encephalomyelitis, commonly known as chronic fatigue syndrome (CFS).

At its core, Unrest is a love story. Together, Jen and her new husband, Omar, must find a way to build a life and fight for a cure. Their struggle to forge their relationship while dealing with her mysterious illness is at once heartbreaking, inspiring and funny.